MALTORIS is obtained after grinding sprouted barley grains or sprouted wheat, stern and rootlet being taken out.

MALTORIS is quite original because the grinding method that is in use allows to work the peripherical layer, which increases the diastasic power of the flour.

MALTORIS improves the rise of the dough which also gives a nice colour to the crust.

MALTORIS promotes fermentation with additional starch intake and the contribution of enzymes called “amylase” which have the property of converting starch flour in maltose (maltose = sugar = energy suppliers to yeast cells) .

Contrary to DIAMALT and CRISTOMALT, the subsequent degradation of the starch and protein does not occur during the manufacturing of malt flour.

The result is less fermentable sugars and less assimilable nutrients during the fermentation of the dough.

It promotes the colour of the crust during baking.

The MALTORIS is obtained by crushing the malted grain.

The malt extract is obtained by concentration of the malt flour.

Compared with DIAMALT and CRISTOMALT, enzyme activity is higher in malt flour.
That is why it is recommended to perform the assays carefully to manufacture stored dough in the freezer. 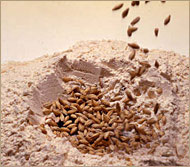